skip to main | skip to sidebar

It's been a lot of years and a lot of different types of fitness plans. P90X (which worked flawlessly for a while), soccer, general laziness. I'm back. My wife is running the Philly Marathon and she is doing so well with her training. The more I watched her get into it, the more it inspired me. I made a rash decision to sign up for the Philly half that same weekend. I've checked out a training plan and I'm only 2 weeks behind. Not bad. It begins today... Well, I ran yesterday, so apparently it began yesterday. Away we go!
Posted by Eric Gervase at 9:09 AM No comments:

This was a positive week and a negative week all at once. I dropped weight quite considerably. But, I was sooooo hoping that I would be under 190 and into the 180s (I was in the 180s most of the week). But, I weighed in this morning at 190 flat. Wah wah... One less piece of food or one more mile on my Saturday run probably would have done it. Drats.

I've been running five days a week, swimming twice and playing soccer once a week the last two weeks. Absent from my schedule has been spin class. It's on Thursday mornings and is really tough to wake up for after a late night at soccer on Wednesday nights (not to mention how sore I've been after soccer). I'm desperately waiting for the weather to get nicer so that I can ride outside and not be so reliant on spin.

But, I think I'm doing too much. Once I add biking back in to the mix (this coming week), I think 5 days of running is probably overdoing it. I'm gonna start "counting" my soccer on Wednesday nights as a running day and not worry about it. In fact, if there is a "toughest workout" of the week, it would probably be soccer. So, I'm not feeling too bad about replacing a day of running.

I'm making this decision because my body is already starting to break down and I'm still pretty far from the triathlon. So, I'm gonna do a little preservation over the next 4-5 weeks until soccer is over. Then, I'll amp it back up again to the finish. I don't want to peak to early and I certainly don't want to drag myself to the starting line either.
Posted by Eric Gervase at 10:55 AM 2 comments:

Well, this is obvious... You sign up for a triathlon, your training schedule gets busy. But, it is quite a bit busier than I was anticipating. Throw in there soccer on Wednesday nights and it's down right nuts. Eh... I will get through it and all. But, I feel like I'm always working out. There is rarely a time where I just "have the day off". In fact, I'm not sure there is ever a day that I don't have something going on.

Where does that leave me? 15 pounds down and 5 to go I guess. That's cool. And, I've picked up a new fun workout (swimming) that adds new challenges that I really never had before. So, that's fun and new. The soccer is also a blast. I've been wanting to get back into soccer for a couple years now. And I'm hoping by 3-4 games in to feel somewhat comfortable out there. But... very busy, very busy. I'm not sure I'd feel comfortable if I wasn't though.
Posted by Eric Gervase at 3:34 PM 3 comments:

Well... it was bound to happen, right? I had a BAD week. I could blame it on the Saturday night group dinner that I went to last night, or the ice cream at 1 am on Wednesday or the all-around hungry feeling I seemed to have all week. Or, I can chalk it up to a bad week and move on. That's what I think I'm gonna do. I weighed in this morning at 193.2 pounds. That is a GAIN of 2.4 pounds this week.

Do I think 2.4 pounds is what I've really "gained" this week? No. I'm quite sure I'll wake up tomorrow morning at 191 something. But, it was still a bad week. I'd really like to get back on schedule and make sure I am under 190 for my next weigh in. Can't be perfect... but I can't repeat this again this coming week either. Back to basics I guess.
Posted by Eric Gervase at 7:26 AM 3 comments:

As you might know, I played my first soccer game in ages on Wednesday night. I thought I would be sore... but I had no idea I would the THIS sore. Thursday and Friday I was so sore it was comical. I was literally walking around like an 80 year old. I took a line drive off my right quad in the game. It didn't hurt that much at the time, but man did it make me gimpy. Not only that, all the muscles that I don't use running were sore (mostly my groin from the constant change of direction).

So... I've been running through it hoping it would just go away. And progressively (though not as fast as I'd like) it has. I ran 6 miles yesterday with Nate, Justin, Bill and Mark and it pretty much bothered me the entire time. I'd say 4.5 miles in it loosened up to the point that it wasn't that bad. But, it wasn't great either. I can live through it though. My real fear is that this happens every week. If I have to recover from my soccer game every week for 3-4 days, that's gonna suck. I hope that it was just a byproduct of not playing in such a long time. We'll see...

In regards to the 6 miler... It was good despite the soreness. We ran at an alright clip. We got faster as we went along and finished in just over 9 minute miles. I need these runs every once in a while because I haven't really been pushing the pace on my own lately. So, running with others has become very important to help me do that.

So.... if you are sore and you want to get rid of the soreness... Just keep running. That's what I'm doing.
Posted by Eric Gervase at 7:07 AM No comments: 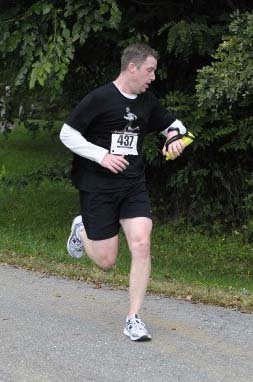 Eric Gervase
My wife Melissa and I live in Adamstown PA where we raise our beautiful daughters Sophia and Juliana. When we are not trying to keep up with them, we are trying to find time to stay in shape and active. This blog is my place to unwind and think "out loud" about running and my constant battle with eating myself silly...